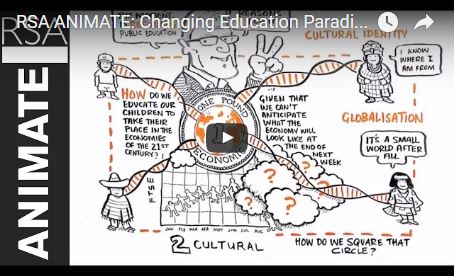 In this talk from RSA Animate, Sir Ken Robinson lays out the link between 3 troubling trends: rising drop-out rates, schools’ dwindling stake in the arts, and ADHD. An important, timely talk for parents and teachers.

Creativity expert Sir Ken Robinson challenges the way we’re educating our children. He champions a radical rethink of our school systems, to cultivate creativity and acknowledge multiple types of intelligence.
Why you should listen
Why don’t we get the best out of people? Sir Ken Robinson argues that it’s because we’ve been educated to become good workers, rather than creative thinkers. Students with restless minds and bodies — far from being cultivated for their energy and curiosity — are ignored or even stigmatized, with terrible consequences. “We are educating people out of their creativity,” Robinson says. It’s a message with deep resonance. Robinson’s TED Talk has been distributed widely around the Web since its release in June 2006. The most popular words framing blog posts on his talk? “Everyone should watch this.”

A visionary cultural leader, Sir Ken led the British government’s 1998 advisory committee on creative and cultural education, a massive inquiry into the significance of creativity in the educational system and the economy, and was knighted in 2003 for his achievements. His 2009 book, The Element: How Finding Your Passion Changes Everything, is a New York Times bestseller and has been translated into 21 languages. A 10th anniversary edition of his classic work on creativity and innovation, Out of Our Minds: Learning to be Creative, was published in 2011. His 2013 book, Finding Your Element: How to Discover Your Talents and Passions and Transform Your Life, is a practical guide that answers questions about finding your personal Element. In his latest book, Creative Schools: The Grassroots Revolution That’s Transforming Education, he argues for an end to our outmoded industrial educational system and proposes a highly personalized, organic approach that draws on today’s unprecedented technological and professional resources to engage all students.